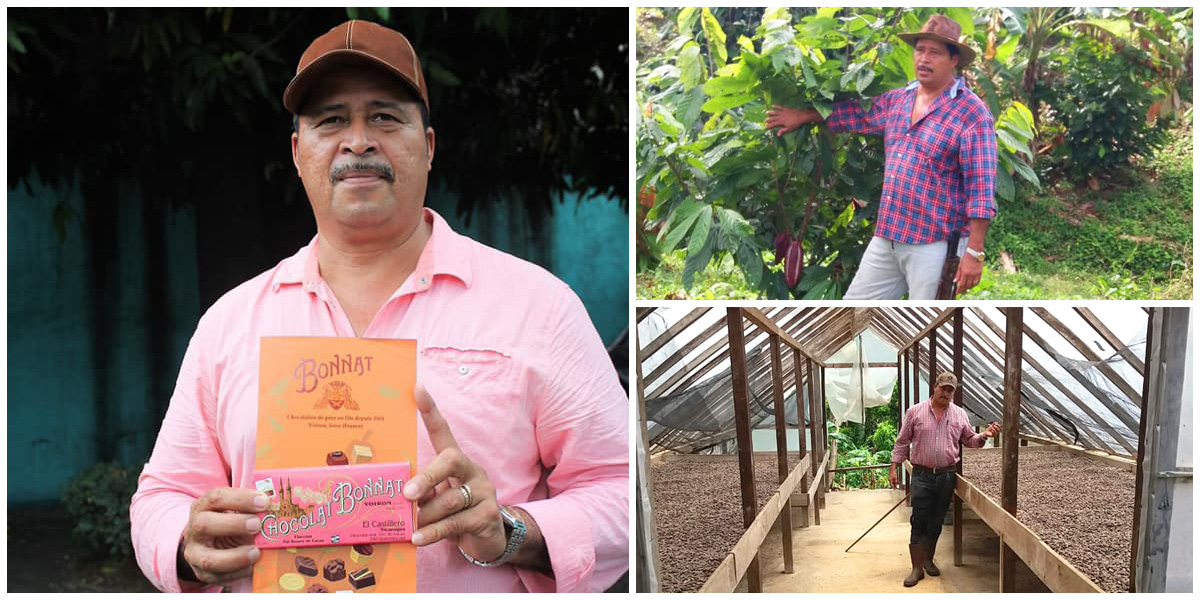 Cooperative CODEPROSA, supported by MOCCA, was able to sell 7 tons of cacao well over 150% of commodity prices.

Fifty-five-year-old Alfonso Tapia smiles softly, his face partly shaded from the hot sun by the brim of his hat. He’s holding a large bar of chocolate. The front of the bar reads «El Castillero.»

«El Castillero» is a bar crafted with cacao beans from the biological natural reserve Indio Maíz, a pristine rainforest situated in the southeastern corner of Nicaragua, bordering the San Juan River and Costa Rica.

The El Castillero  is an original blend dark chocolate produced by 34 small cacao farmers members of COODEPROSA cooperative. Appreciated by a wide range of chocolatiers that stand out the flavour notes of this cacao bean, CODEPROSA  is part of the 7 cooperatives supported by MOCCA in Nicaragua. Thanks to the training under the processing protocols, the cooperative developed a flavor profile that is now part of a web platform showcase of high quality cocoa that gives buyers a resource to locate the types of cocoa they want.

On the other side of the world, a conveyor belt moves slowly, laden with chocolate bars destined for online chocolate stores in the USA, Canada, Denmark, Belgium and beyond. They read “El Castillero” or «Don Alfonso» – the  appellation of origin names of the region and the man who supplied the cacao for both of these delicious bars of dark chocolate.

Alfonso Tapia – or «Don Alfonso» as his friends know him – is president of the Cooperativa de Desarrollo Multisectorial Productivo del San Juan (COODEPROSA), an organization integrated by 34 small farmers (10 women) in the municipality of El Castillo, Río San Juan, Nicaragua.

When Alfonso dedicated himself to the production of cocoa a few years ago, he never imagined that a European-made chocolate would come from his own cooperative, bearing his own name, a name he is deeply proud of.

The cooperative  was able to sell over 7 tons of specialty cacao using the Cocoa Flavor Map fermentation protocol to a Belgian cacao importer Silva Cacao at $3,960 per ton, well over 150% of commodity prices. Silva Cacao distributes this cacao amongst exclusive European chocolate makers and is marketed under the name “El Castillero” in Europe.

A Path to the Global Stage of Chocolate Through Agriculture

In El Castillo, the main economic activity is agriculture, and Nicaraguan cocoa is often an international benchmark for quality and aroma.

“It was very difficult to market our cocoa,” recalls Don Alfonso. «We tried to sell it in the local market, and many times nobody bought it. We were unmotivated.” Don Alfonso

In 2019, Don Alfonso and the other cooperative farmers joined MOCCA, a five-year initiative, funded by the United States Department of Agriculture (USDA) and led by TechnoServe.

In Nicaragua, 3,500 cocoa producers are undergoing training to improve their profitability and productivity, strengthen their knowledge of good agricultural practices, improve the quality of their beans, and connect them with buyers of high quality cocoa, including several in key European markets.

And the training quickly paid off. It didn’t take long for the Danish company Mikkel Friis-Holm Ottosen to launch the “Chocolate Don Alfonso” line of chocolate bars manufactured with cocoa from his farm.

“An important point has been the technical training, which allowed me to develop [myself] and take away my fear of speaking with other producers,” Don Alfonso says of his success.

The work with TechnoServe and LWR and the increased income allowed Don Alfonso to diversify his farm with other things such as fruit trees and improved pastures. He also purchased new equipment for the handling of cocoa cultivation and made improvements to the house located on the farm.

The international products and prizes from national cocoa competitions have increased the international recognition of the cocoa produced in El Castillero, and now more chocolate companies in Europe are interested in buying from the cooperative.

“Much of the potential is in the people behind the cacao, as was the case of accepting El Castillero. When El Castillero came to us, the fermentation of the beans could have still been improved to reach its greatest potential. However, we learned about El Castillero and the farmers through Lutheran World Relief. When we saw how the farmers were striving to improve their cacao and build their business, that was the turning point for us to say, yes, we will use this origin for a bar, and we see it as a work in progress. I think this bar has even more potential to show” said Stephane Bonnat, who was one of the first chocolatiers to check it out on the table of Cacao Flavor Map.

The cooperative also has a small artisan chocolate factory that tourists often visit, which employs other members of the community as a way of supporting their families.

“I always share what I have learned with other producers,” says Don Alfonso. “I have tripled my cocoa production, and I expect to grow up to 40% next year.”

“Now I have a higher income, and that allows my family to access a better quality of life. My goal is to continue growing with the cooperative to support other producers, generate employment, and promote development in my community.”

But all of that was about to be jeopardized.

How is climate change impacting the future of coffee? Learn four ways.

In mid-September, the situation in El Castillo turned deadly. Disastrous floods swept through the area, and Alfonso Tapia lost most of the items in his home.

The cocoa farms were hit hard by the flooding and strong winds. While many cocoa plants were damaged, Don Alfonso is also concerned about the proliferation of crop diseases such as monilia and alkaptonuria, also known as black ear.

Unfortunately, the floods were part of worsening weather conditions in recent years, due to climate change. Last November, the country was also hit by Hurricanes Eta and Iota, the latter being the strongest November hurricane on record. They displaced tens of thousands of people across Nicaragua, Honduras, El Salvador, and Guatemala.

According to the UN, Nicaragua is likely to see more of these adverse weather events like those that hit El Castillo, which are likely to “directly affect poverty levels, food security, jobs, economy, social structure and the overall development of the country.”

For the estimated 95% of Nicaraguan cocoa producers who are small-scale farmers, climate change poses serious threats to their production, including:

During the ongoing COVID-19 pandemic, the combined economic and environmental challenges have been even more difficult to address.

Thankfully, Don Alfonso has been participating in the TechnoServe training. But these floods highlight an increasingly urgent need for climate-related assistance and training for cocoa farmers.

TechnoServe and LWR training in Nicaragua focuses on the skills and knowledge needed for rehabilitating cocoa plants, which may be needed now more than ever, while supporting access to high-quality supplies and finance with long-term sustainability as a key goal.

As he works to rehabilitate his plants and home, he’s focused on getting through these challenges and supporting his daughter, who is studying for a career in management in Managua, as she moves forward in her career.

“I want her to be promoted,” he says.

And so Don Alfonso isn’t giving up on his dream to sell the best cocoa, grow the cooperative, and win recognition on the global stage.