“My dream was to be a great coffee grower”

You are here:
NewsNoticias 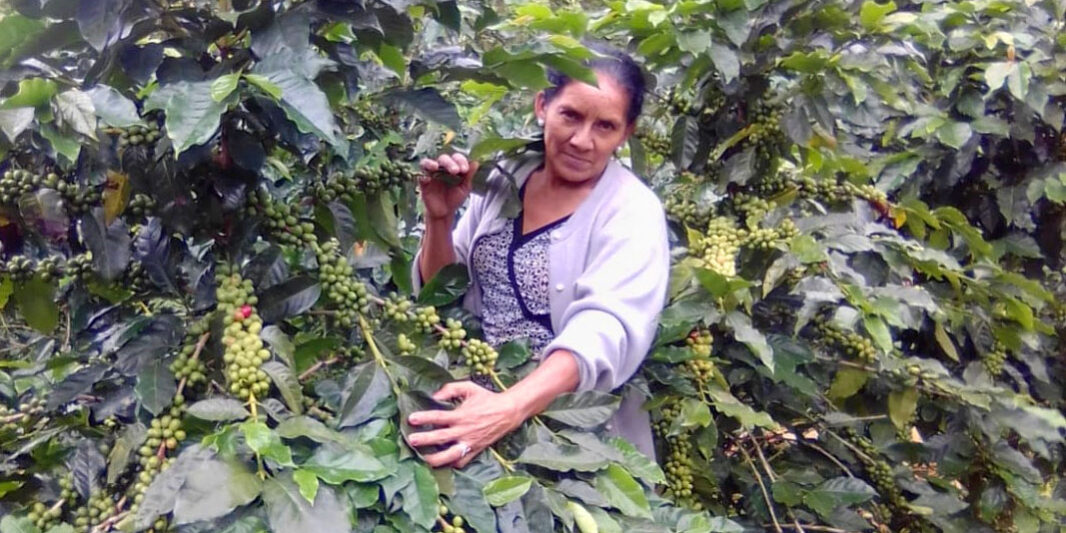 Like the taste of a cup of coffee, the lives of the protagonists of this story are bittersweet. Despite this, these women have found a refuge, a means, and a reason to live in their coffee plantations.

Francisca (52) and María Simona (64) are two coffee growers who live in Jinotega, one of the main coffee producing areas of Nicaragua. In addition to producing coffee,, both women are single mothers. Francisca has three children, the youngest of whom is still dependent on her and is studying at the university, while Simona’s four children are now adults who can fend for themselves.

Both women are now part of the MOCCA project training.  Despite having started coffee production many years ago, they did not hesitate to become part of the four thousand producers that receive field training through the partnership between MOCCA and the Mercon Coffee Group.

Francisca and María agree that in their beginnings they had no idea how to grow coffee. “I wanted to be a coffee grower, period, and when I started I planted seeds wherever there was room for one, I didn’t know how to place a furrow. But today, thanks to the training, I have ordered my plantation and I even learned how to use an A device and make contour lines to plant on slopes”, says María Simona Ruiz.

But this was not the only learning she put into practice. Thanks to the training provided by MOCCA and MERCON, its partner, this grower has been able to implement Integrated Pest and Disease Management. She monitors the plantation, has built a shade control for excess humidity, and places plastic bottle traps to combat CBB.

“They taught me how to prepare a garlic-based biopesticide, so I no longer have to buy agrochemicals”, says Simona Ruiz.

Thanks to this, and timely management, Simona has been able to reduce her pest and disease control costs by 70%.

“MOCCA gave me a roadmap”

For Francisca, the most challenging part in her early days as a grower was not knowing where to get information.

“I would ask my neighbors, but everyone would tell me something different. On one occasion I even burned part of my plants because I misapplied a diluted fertilizer, so when MOCCA approached me about joining the training, I immediately signed up. Once I started participating, I realized I had found the guidance I needed so much,” she says.

“I have learned a lot about the types of fertilization and when to apply them. Thanks to the new way of applying fertilizer my coffee has improved and my production has increased. Before I used to yield 20 quintals and this year I am going for 40 quintals”, said the producer, very happy to double her production.

Francisca, with a face full of hope, walks onto her coffee plantation and smiles as if she were listening to the Waltz of the Flowers in her head. In the shade of the coffee trees, today she finds not only a source of income, but also a refuge. She confesses that the first idea of producing coffee came to her when she was still married to the father of her three children. “I told him so many times to teach me, that this would be our children´s inheritance, but he never did.” Like many women in the countryside, Francisca was left alone in charge of her three children and it was through an unwavering tenacity and desire to improve that she fed and educated her children, carving out a life for herself first as a vegetable producer and now as a coffee producer.

“Of course I felt sad when I saw myself with my three children and without any support. There is a little coffee seedling, I would say to myself, and tears would run down my cheeks when I was planting my first seedbed, filling the bags with soil, but at the same time I felt happy to go to the field and plant. Planting coffee was like a challenge because I said ‘I am not going to cry anymore, I am going to get ahead and prove that I am not going to die of hunger and that I am going to be a great coffee grower’”, says Francisca Centeno.

Francisca and María Simona, are now respected as women producers, and have the recognition of the people of their communities, although they confess that it was not always that way. At the beginning, they felt misunderstood by their neighbors and relatives, because in this zone the coffee farms are mainly led by men.

“At the beginning I was told the whole idea was crazy, how could I think that coffee would give me a harvest at such an altitude, and with such heavy rainfalls, when it is precisely the altitude of the place that allows me to yield such good coffee. And now that my farm is doing well, they tell me “your coffee is beautiful, you are a role model, enterprising woman, how do you walk around with that backpack pump on your back applying fertilizers” and other things like that.  For me it is a great pride to refute men, and show them that women can be coffee growers”, Simona shares with us, while Francisca assures us “There are people in the community that admire me and use me as an example for other women. In my opinion, there are men who have changed their perception of the capacity of women in the area.

These coffee growers are not only increasing their productivity and income, they are proud to contribute to the community by creating jobs. Their aspirations lead them to project themselves not only as coffee vendors, but also as processors and developers of their own brands to create added value and more income. To achieve this, they have proposed a growth plan that includes acquiring a vehicle, and to continue doing what they have done so far, learning and undertaking to continue opening new paths in the production and commercialization of coffee.