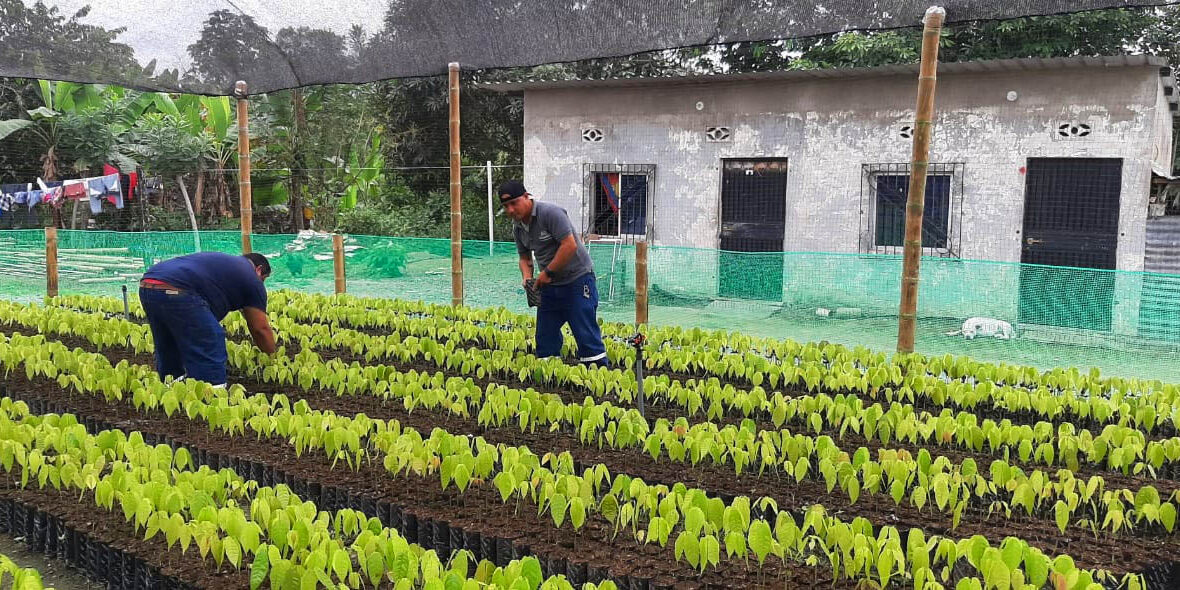 The National Association of Cocoa Exporters (ANECACAO), with 34 years of institutional life, is made up of 31 exporters located in the main cacao-producing areas of the country and has its headquarters in Guayaquil – Ecuador.

ANECACAO is the organization with the largest representation in Ecuador’s cacao sector and has an outstanding track record working with cacao producers who are dedicated to commercializing cacao under the implementation of Good Agricultural Practices (GAP) to increase the productivity of their farms through environmentally friendly conditions.

During the years 2002 and 2004, ANECACAO built 7 cacao nurseries to reproduce plants using the grafting method. The nurseries were located in strategic sectors of Ecuador such as: Puerto Inca, Cumandá, Vinces, Ventanas, Quevedo, Buena Fe and Santa Elena.

70% of the production of these nurseries was sold to entrepreneurial farmers throughout the country and 30% was donated to associated producers in the provinces of Bolívar, Santo Domingo de los Tsáchilas and the Santa Elena peninsula, with the objective to carry out plantation renovations using genetic material with high production characteristics and resistant to diseases.

“Despite having the experience and technical knowledge, the economic boost was necessary to allow the construction of a nursery with a temporary structure for 150 thousand plants with the projection of implementing a permanent structure for the production of 1 million seedlings”, Cristian Noboa, National Technical Chief ANECACAO

ANECACAO joined TechnoServe and Lutheran World Relief’s MOCCA program with the short-term objective of implementing a nursery with the capacity to produce no less than half a million plants per year using highly productive materials such as EET – 800, EET 801, CCN-51 and other local varieties that present optimal characteristics of yield per hectare.

Through the support of MOCCA, ANECACAO was able to improve the data records that are now being used for a projection of another nursery on a larger scale. The experience allowed for the adjustment of budgets and operation, and even the variation in certain processes.

“We aspire for this nursery to be self-financing in such a way that the rest of the cycles are generated with the income from sales and we manage to increase the number of seedlings. Our commitment is that by 2023 we can produce one million plants and thus contribute to meeting Ecuador’s goal of one million hectares of cacao by 2030. In addition, we believe that in the future we will also be able to produce seeds from trees native to Ecuador that allow the implementation of agroforestry systems as a measure to confront climate change.” Cristian Noboa, National Technical Chief ANECACAO

Fun Facts About Ecuador and Cocoa

In 2011, Ecuador received the award for «best cacao for its oral quality» and «best cacao bean by geographic region» at the Salon du Chocolat in Paris, France.

In the second half of the 16th century, this profitable business attracted the interest of Guayaquil businessmen and, in 1600, they got the first harvests, always on the banks of the tributaries upstream of Guayaquil, for which it is known throughout the world like Cacao de Arriba.

The country is considered the largest exporter of fine cacao in the world with 65% of the market.

«Before being part of the MOCCA project, I worked in my cocoa plot in a simple way and did not know much about good agricultural practices and agroforestry systems»
28 de octubre de 2021